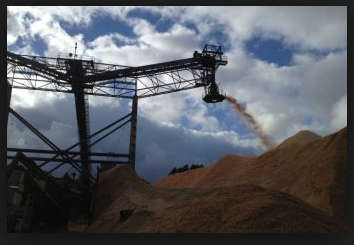 A Gunns woodchip mill in northern Tasmania has reopened, two years after it closed, on the back of new contracts with Japanese customers.

The Gunns mill at Long Reach, near the fallen company's proposed pulp mill site in the Tamar Valley, will supply 500,000 tonnes of plantation woodchips by March next year.

In a rare piece of good news for the ailing Tasmanian forestry sector, receivers KordaMentha have hired more than 100 contractors to work the plant.

KordaMentha's Bryan Webster says 10 shiploads to Japan have been locked in and up to $3.5 million will be injected into the state's economy.

But he warns a resurgence in forestry is still a way off.

"I'd like to say it is a turnaround but I don't think it is," he told AAP.

"I think it's just a renewed focus by ourselves to make sure we're preserving the value of the business that's there and not letting it ebb away."

Mr Webster said it was crucial that the state's forestry skills were not lost forever.

"There's not a lot of money being made out of this but what I'm worried about is, if I shut down the whole of Gunns from a woodchipping perspective, there's going to be so much of a brain drain and a skill drain from Tasmania," he said.

Eucalypt plantations currently could supply the mill for up to 15 years and longer if re-planting occurred, Mr Webster said.

Two Gunns sawmills and a range of equipment have already been offloaded by the receivers but the big ticket items remain the permit for the proposed $2.3 billion pulp mill, the woodchip mills and 40,000 hectares of plantations.

They won't go onto the market until the status of Gunns Plantations Ltd managed investment schemes is clarified by court action.

Mr Webster said interest from potential buyers in the pulp mill permit was strong, even before it had been advertised.