The multi-billion dollar mill was first proposed a decade ago but has been plagued by some of the largest protests in Tasmanian history over environmental concerns and the collapse of the original proponent, former timber giant Gunns.

Administrator KordaMentha is trying to sell the permit and the Tasmanian Government recently passed special legislation designed to shore it up.

The pulp mill is at the forefront of the March state election campaign, with Premier Lara Giddings using the Greens' opposition to the mill as justification for dropping the party from minority government.

Environmentalists are concerned the chemicals involved in the pulp mill could cause air and water pollution, poison marine life and damage quality of life for locals.

But the mill's supporters say it will be world's best practice and create hundreds of direct jobs in Tasmania, which has Australia's highest unemployment rate.

KordaMentha has said publicly it has six investors interested in the mill but some only want the land and associated assets.

Claim appears to back newspaper report 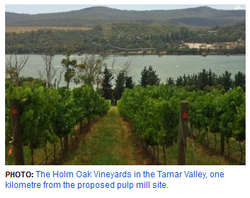 However, Mr Cousins met with senior KordaMentha staff handling the sale process, partner Bryan Webster and director Antony Munro, and said they confirmed there is no serious bidder.

"They said they didn't know (if there is)," Mr Cousins said.

"That they had no way of knowing whether there were and they could not know until the end of March when bids are finally due to come.

"There's no mill there (in the Tamar Valley) and there isn't ever going to be one there."

Mr Cousins's claims appear to back a report in The Australian newspaper that the only serious bidder for the pulp mill has withdrawn.

As a former adviser to John Howard and with decades of corporate experience, Mr Cousins is not surprised.

"There aren't many companies in the world or governments these days who do get involved in this kind of issue that is likely to tarnish their reputation and has all these risks attached," Mr Cousins said.

However, in a statement KordaMentha said there was still "potential" that one of the bidders may be interested and they would not know until the deadline for bids expires on March 31.

The pulp mill has been given new life by Ms Giddings, who has acknowledged she recalled parliament and passed new legislation at the request of KordaMentha.

The legislation extended the mill's permit to 2017, killing off a legal challenge and removed a key clause that suspends operations if the mill breaches environmental conditions.

But the administrator also revealed they were sent a draft of the legislation by the Premier's office to approve before it was tabled in parliament.

"For the Government to be doing that is really quite shameful," Mr Cousins said.

"They had a meeting with the Premier and (at) that they asked to see the draft legislation and that in a matter of days it duly arrived, something rather outside my long corporate experience.

"The process was corrupt in my view and I use that word very intentionally."

The Deputy Premier, Bryan Green, has denied the allegations.

Mr Green says KordaMentha received a copy of the legislation on the day it was released publicly.

"KordaMentha received the legislation on the same day as it was released publicly, on 21 January, along with other stakeholders including members of the Legislative Council," Mr Green said.

"It is a nonsense to suggest KordaMentha was sent this legislation to approve. It received it the same day as everyone else."

Cousins says it is another dark chapter for mill's history

According to Mr Cousins, it is another dark chapter in the pulp mill's controversial history.

In 2007 Gunns withdrew from the independent assessment process and the former Lennon government stepped in, scrapping public hearings, which resulted in Gunns receiving its permit.

"(It) continues the long history that successive Tasmanian governments have had in the Gunns matter, trying always to stitch up some deal, behind closed doors instead of allowing this to be done publicly," Mr Cousins said.

KordaMentha has confirmed it received the draft legislation from the Premier's office but has said it did not request any further changes to the legislation.

The cost of the project, last priced at $2.5 billion, was also discussed, but it has blown out further.

"So you're talking about $4 (billion) to $5 billion, something of this kind.

"There are other places in the world where you can make those investments with much greater certainty and without all of this controversy."

Economist does not believe mill will be built

Economist Dr Richard Denniss from the Australia Institute is not surprised and does not believe the mill will ever be built.

"The longer this drags on, the dearer it gets to build and the lower the world pulp prices are," Mr Denniss said.

"I really just don't think that a private investor is going to be willing to put their own hand in their own pocket to build such an expensive project.

"The dollar would probably have to fall back below 70 cents before this project would even have a starting chance."

There are also concerns the global pulp market is already over-crowded.

"There is a potential bloodbath in the pulp industry," Mr Denniss said.

"The independent forecasters are suggesting that there is an oversupply, a wave of oversupply as they put it and that large losses can be expected."

However, the mill's supporters say the economic benefits mean it must go ahead immediately.

They claim it will rake in $10 billion for the struggling local economy and create 3,000 indirect jobs.

"We had 350 log trucks on the road here in the height of the logging industry so [it's] probably fair to say you'd see another 200 trucks back on the road and that'd be very good for our future," Mr Elphinstone said.

"We certainly need some bigger industry in the state or otherwise we'll continue to go backwards and we're obviously not supporting ourselves now."

Rebecca Duffy's vineyard is just one kilometre from the pulp mill site and she says the uncertainty over the future of the mill is an ongoing concern.

"It's over a decade that we've been living with this pretty much on our doorstep, so certainly we've just about had enough of it," Ms Duffy said.

Ms Duffy's winery Holm Oak is one of 12 in the Tamar Valley that have joined forces, writing to Tasmania's major political parties calling on them to abandon their support for the mill.

Her greatest concern is that the pulp mill will discharge an odour so repulsive it drives customers away.

Gunns denied the mill will smell, but some experts say the chemicals used in kraft pulp mills can smell like raw sewage.

"I've heard that it can be quite bad so that's certainly a major issue for us having our vineyard so close and also our cellar door so close," Ms Duffy said.

"If that happens, then certainly we're going to have major problems on our hands."

Ms Giddings has dismissed the environmental concerns arguing that safeguards remain in place.

"Why else do you think we have a permit that is that big and thick?"

Ms Giddings believes that if the pulp mill is not built in Tasmania, it will be built somewhere else.

"We do not want export our jobs to Central America or to China off the back of our plantation timber," she said.

KordaMentha is continuing with the sale process which finishes on March 31, after Tasmanians vote in the state election, and there is no way for the company to know before voting if there is a legitimate investor.

Mr Cousins lead a corporate campaign against potential backers of the mill in 2007, warning off investors and financiers.

He says if an investor emerges at the last minute, he will re-start his crusade to stop the project.

"We won and if somebody now tries to reverse that decision, you will see social unrest in Tasmania greater than the Franklin River," he said.

Mr Green says Korda Mentha received a copy of the Legislation on the day it was released publicly.

He says other stakeholders including the Legislative Council were also provided a copy of it that same day.

More in this category: « Norske Skog entered into new long term sales agreements in Australasia Pulp turned into power »
back to top