For the second time in a row, Metso's innovative technology has played a major role in winning the Climate Action of the Year Award in Finland. This year, the Sustainability Forum of the Finnish Energy Industries granted the accolade to the project called "The Energy Turnaround in Vaasa", a city of 65,000 inhabitants on the west coast of Finland. The project features cooperation between three local energy companies: Vaasan Sähkö, Vaskiluodon Voima and Westenergy. Metso supplied technology to the two latter companies' plants. 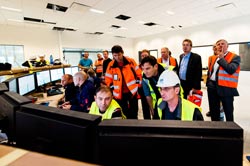 Through their cooperation, the three companies have been able to significantly decrease CO2, methane and particulate emissions by a total of 525,000 tons per year, resulting in better local air quality. The amount equals the annual CO2 emissions of about 175,000 cars. Other benefits of the project include the utilization of non-recyclable waste as well as the positive investment impact on the local economy.

Vaskiluodon Voima runs the world's largest biomass gasification plant, which was supplied by Metso. The 140 MW plant is groundbreaking in many ways, as this is the first time in the world that biomass gasification is being adopted on such a large scale to replace fossil fuels. Nearly half of the coal used can be replaced with gasified biomass, making the plant highly environmentally friendly.

"We now use three to six kilos less coal per second in our production than earlier. This means having one coal shipment less per month," points out Matti Loukonen, Power Plant Manager of Vaskiluodon Voima.

Metso's delivery to the plant included fuel handling, a large-scale dryer and a circulating fluidized bed gasifier, modification work on the existing coal boiler and a Metso DNA automation system.

"Vaskiluodon Voima made a coal-fired plant go green, and for this reason will set an example for others to follow in the future," says Jyrki Holmala, President of Metso's Power business line.

Metso's other customer involved in "The Energy Turnaround in Vaasa", Westenergy, recently started up a new energy-from-waste plant that runs on source-separated waste and has a capacity of 15 MW of electricity and 40 MW of district heat.

The plant is controlled with a Metso DNA distributed control system and an information management system. Modern automation plays a major role in managing the plant successfully. Plant operators will be able to maximize the incineration capacity, keep combustion and steam production stable, as well as maintain high process availability. Extensive, employee-empowering automation will ensure that waste burns safely and emissions stay low.

"Overall, the project was a big success for both Westenergy and for the contractors involved in the project," comments Jan Teir who was Managing Director of Westenergy during the project. "Concerning the involvement of Metso, I am also pleased since we got the control system we wanted. In addition, Metso also supplied one of the best crushers in the world that will be used to crush large items, for instance furniture, in the bunker of our plant."

About the Climate Action of the Year Award

Climate Action of the Year is an acknowledgement awarded annually by the Finnish Energy Industries to an energy-industry company or organization that has carried out investments or development projects to abate climate change or has, through other actions, contributed to combating climate change.

Westenergy Oy Ab is owned by five municipal waste management companies, which operate in an area consisting of more than fifty municipalities with altogether more than 400,000 inhabitants.

More in this category: « Holmen to Build Wind Farm in Jointly-Owned Company Bolloré Thin Papers invests in renewable energy »
back to top