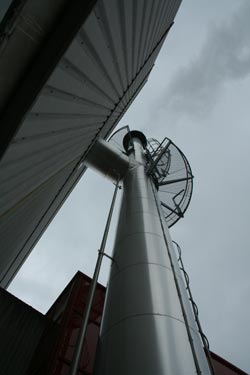 Since 2004, the company has been steadily moving on a regular basis towards ”greener” production practice with some of the following measures: installed a new Biomass Boiler, invested in an ultra-modern Water Treatment Plant (Wet Oxidisation), obtained both FSC and PEFC certification, launched a Life Cycle Analysis on its papers, introduced an energy saving programme, developed PRIMAGREEN – the first recycled thin print on the market and finally created an internal eco-design cell.

In order to support sustainable development and to control the use of energy, the board of Papeteries du Léman has analysed several alternative solutions to fossil fuels with the view of reaching a positive economic and carbon report.

Wood appeared to be the optimal solution: as a renewable energy, it makes it possible to maintain dynamic growth, whilst taking charge of the use of energy.

A new boiler room with 8.2 MW of power was therefore installed and since it came into service on January 7th 2013, it has provided 50% of the steam requirements for the site, with the balance being provided both by the household waste incineration plant in Thonon-Les-Bains, in conjunction with an additional gas boiler.

The wood boiler, which is fuelled exclusively with locally sourced biomass, also plays its part in reducing our greenhouse gas emissions by more than 11,500 tons of CO2 per year.

Construction took place in two distinct steps. The first consisted of deconstructing the former coal boiler which had not been in service since 2000.
Nevertheless, we were able to keep the building, and this now houses the wood reserve and the new boiler itself. After spending almost a year taking it down we were then able to begin construction of the boiler, and we began by assembling the modules that needed to be mounted. Construction was finally completed at the end of October 2012.

The Key steps towards making the boiler operable

It took several steps in order to make the boiler operable: the first two weeks of November 2012 were spent connecting it to the steam piping and also obtaining the certification necessary to run the boiler. By mid-November, we started it up for the first time so that the interior building work could dry. The temperature was increased by 100 degrees every 24 hours over ten days in order to reach 900 degrees Celsius.

Operations officially started on December 1st, 2012: the initial goal was to have it running at 50% capacity for several days and then make adjustments and changes accordingly in order to begin regular production in the system by early January. A whole set of tests were performed, including emergency shutdowns, in order to test all of the mechanics for automatic operation and safety.

Since January 7th, the boiler has been running at full throttle. Tests, measures, and performance evaluations with the operator have made it possible to verify the installation and the match between the services it provides and the modes and methods that appear in the contract.

Today, the new biomass boiler in PDL has reached a steady state of operation and will make it possible, beginning with this year, to reduce CO2 emissions by 11,500 tons per year.

Cost of the project

It costed 4.8 million Euros in order to complete this project, 1.7 million of which was provided by the Agency for the Environment and Energy Control.
A good number of biomass boilers have been built in France recently, but it’s rare to see one set goals such as the ones Papeteries du Léman has set for itself: In total, 23,000 tonnes of exclusively local biomass will fuel the plant every year. And at the same time, this investment will act as a support to the timber industry which is still underdeveloped in the Chablais region.

The PDL biomass boiler in figures

• Consumption:
Consumption of 23, 000 tons of wood per year which it receives from within a radius of 150 km.

• Duration of construction work:
2 years, plus one month for operation set-up.