Financial analysts are invited to participate in the call by dialing 1-866-321-8231 (North America) or 1-416-642-5213 (International). Media and other interested individuals are invited to listen to the live webcast at www.domtar.com.

The first two sales contracts involve the owners of 14,000 acres of FSC-certified forest in Western North Carolina and Southwestern Virginia, and will create more than 100,000 metric tons of carbon offsets in their first year.

"As a partner in the Carbon Canopy initiative, Domtar is proud to support this innovative approach to expanded FSC forest management certification and enhanced return to landowners. We congratulate Dogwood Alliance, Staples and other key partners for their commitment to unlocking the value of forests,'' said Paige Goff, Domtar's Vice-President - Sustainability and Business Communications.

For more information on how the Carbon Canopy exchange operates and its benefits for landowners, forest-product companies, corporate green leaders and the ecosystem, please refer to the press release issued today by Dogwood Alliance.

After testing whether diners would read the latest news on printed receipts in two of the capital's most famous restaurants - the Old Ebbitt Grill and The Hamilton - the Clyde's Restaurant Group has decided to implement this initiative in all of their locations. Clyde's operates 14 of the best known restaurants in the Washington area.

"The news updates have made it onto our menus, they've become part of our DNA," said David Moran, Managing Director of the two restaurants. "At first we thought their initial acceptance might just be the novelty of having the top headlines printed right out of the receipt system, but we can see that diners find the updates compelling," Moran said.

"The 'news receipts' have worked despite diners' access to their smartphones, a demonstration of the power, speed and convenience of paper," said Kathy Wholley, Domtar's Director of Communications and Strategy. "This news-on-paper initiative goes to the heart of what we're trying to convey in our 'PAPERbecause' advertising campaign."

The software that weaves the AP headlines into the restaurant work stations was written by MICROS Systems of Columbia, Maryland, which supplies software to more than 300,000 restaurants worldwide. When a waiter punches up a meal receipt, a separate news ticket comes out. The system looks for an update every two minutes.

Washington journalist Frank Mankiewicz, one of the people behind the initiative, said, "Many experts told us to get a life and go digital. But our argument is based on the same reasons newspapers keep publishing ink-on-paper: There is a wonderful human connectivity to paper that works."

The news receipts update the top dozen AP news stories from around the world, including the weather and stocks. Each receipt flags Domtar's award-winning ad campaign at www.paperbecause.com and delivers one of its signature messages, "Paper is Good. Pass it On.

Domtar completes sale of Ariva business in the United States

Ariva's Canadian operations are not affected by the transaction and will be consolidated into Domtar's Pulp and Paper Division.

Read the previously announced sale of its Ariva business in the United States here....>

Domtar Corporation has announced that it has entered into an agreement to sell its Ariva business in the United States to privately-held Central National-Gottesman Inc. The business will be integrated into Lindenmeyr Munroe ("Lindenmeyr"), a division of Central National-Gottesman, and the transaction is expected to close at the end of July 2013, subject to customary closing conditions.

"Our employees' efforts to adjust to a rapidly changing printing industry are commendable and I am appreciative of their dedication over the years," said John D. Williams, President and Chief Executive Officer of Domtar. "Today's decision to rationalize and sell the business represents the best alternative for our shareholders and the agreement with Lindenmeyr, a well-established and long-time valued business partner of Domtar, will assure business continuity for customers. Lindenmeyr has committed to quickly assess its business requirements and this will provide employment opportunities for Ariva's employees."

In a subsequent transaction that Domtar is not party to, immediately following the closing of the sale, the purchaser, Central National-Gottesman Inc., has agreed to sell the US Midwest portion of the Ariva business to The Millcraft Paper Company, a family-run paper merchant based in Cleveland, Ohio.

A northwestern Pennsylvania paper mill is still in business even as state police investigate the cause of a fire in a conveyor tunnel used to deliver wood chips to the plant.

The fire was reported Friday about 12:30 p.m. at the Domtar Paper Co. site in Johnsonburg, about 100 miles northeast of Pittsburgh. Nearly 200 firefighters from 25 departments in six counties helped battle the blaze until about 11 a.m. Saturday. Nobody was injured.

Domtar spokesman Craig Timm says the plant is using a manual backup system to deliver chips, while a fire marshal investigates the cause of the fire in a 1,000-foot tunnel beneath the 125-year-old plant.

Police say extensive damage to the tunnel might delay that investigation several days.

Timm says he can't comment on the investigation or on any damage estimate.

Domtar Corporation has provided an update on its financial performance for the second quarter of 2013. Domtar's management expects sales to be $1,312 million and estimates the operating loss to be between $30 and $35 million.

Estimated operating loss in the second quarter of 2013 includes a litigation settlement charge of $49 million, closure and restructuring costs of $18 million, a charge of $5 million related to the impairment and write-down of property, plant and equipment, and depreciation and amortization of $93 million. Adjusting estimated operating loss for these four amounts yields EBITDA before items1.

"We had sub optimal pulp productivity and unusually high costs due to significant planned maintenance and delayed restarts in our pulp mills." said John D. Williams, President and Chief Executive Officer.  "However, a closer look at our operations demonstrates that by quarter end we made very good progress on addressing production issues in the Pulp and Paper business. We remain confident that we will return to more normalized productivity levels across the business by the end of the third quarter."

(All financial information is in U.S. dollars, unless otherwise noted.)

Press event for inauguration of BioChoice™ lignin at Plymouth Mill

Domtar Corporation (NYSE: UFS) (TSX: UFS) and Federal and State Officials invite the media to attend a press event to mark the inauguration of a commercial-scale lignin separation plant - the first U.S. facility of its type in more than 25 years. 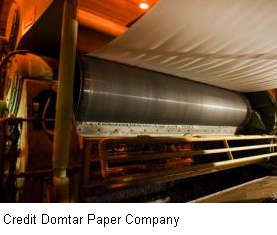 A paper company has announced plans to invest $20 million in its facility in Hancock County and retain 452 jobs. Domtar Paper Company LLC says it will upgrade and add equipment to its Hawesville operation.

Domtar operates 13 mills throughout the world, including its pulp and paper facility in northwestern Kentucky. The Hancock County plant makes an estimated 80,000 tons of market hardwood pulp—used for paper production—and about 600,000 tons of printing grade paper each year.

One of the changes at the plant will be a new conveyor system, which Domtar says will lower operating costs and reduce greenhouse gas emissions from the facility.

Benefits of higher paper volumes and pulp prices compared to fourth quarter offset by higher production costs
(All financial information is in U.S. dollars, and all earnings per share results are diluted, unless otherwise noted.)

Share buyback totaled $47 million in the first quarter of 2013

Charge of $10 million ($7 million after tax) related to the impairment and write-down of property, plant and equipment;

Gain on the sale of property, plant and equipment of $10 million ($6 million after tax); and

Premium paid and costs related to the debt repurchase of $3 million ($2 million after tax), included in interest expense.

Closure and restructuring costs of $27 million ($18 million after tax);

Charge of $12 million ($8 million after tax) related to the impairment and write-down of property, plant and equipment and intangible assets; and

Net losses on the sale of property, plant and equipment of $2 million ($1 million after tax).

Premium paid and costs related to the debt repurchase of $50 million ($30 million after tax), included in interest expense;

Closure and restructuring costs, including write-down of property, plant and equipment, of $3 million ($2 million after tax); and

Negative impact of purchase accounting of $1 million ($1 million after tax).

"The first quarter results in our paper business were disappointing and this is due to low productivity, resulting in high costs," said John D. Williams, President and Chief Executive Officer. "While we benefited from better paper pricing than we expected, the reconfiguration of our Marlboro, South Carolina operations resulted in multiple paper grade transfers, upsetting productivity at several of our paper mills. We anticipate a return to a more normalized productivity in the quarters to come." John D. Williams added, "Our personal care business remains on track and the capital investments should start to deliver the expected benefits towards the end of 2013."

The decrease in operating income before items1 in the first quarter of 2013 was the result of higher usage for energy and chemicals, higher unit costs for fiber, lower average selling prices for paper, higher general production costs and higher selling, general and administrative and other expenses. These factors were partially offset by higher volumes for paper, lower costs for planned maintenance, higher average selling prices for pulp and a favorable exchange rate.

Cash flow provided from operating activities amounted to $63 million and capital expenditures amounted to $56 million, resulting in free cash flow1 of $7 million for the first quarter of 2013. Domtar's net debt-to-total capitalization ratio1 stood at 18% at March 31, 2013 compared to 16% at December 31, 2012.

Domtar returned a total of $63 million to its shareholders through a combination of dividend and share buybacks in the first quarter of 2013. Under its stock repurchase program, Domtar repurchased a total of 9,266,503 shares of common stock at an average price of $79.87 since the implementation of the program in May 2010. At the end of the first quarter of 2013, Domtar had $258 million remaining under this program.

We expect continued momentum in pulp markets with moderate improvement in pricing and steady shipments. In papers, our volumes are expected to stay relatively similar to the first quarter in the near term. The second quarter will be affected by the usual seasonal higher maintenance activity in pulp, while input costs are expected to decline slightly, notably due to lower usage of energy.

The Company will hold a conference call today at 10:00 a.m. (ET) to discuss its first quarter 2013 financial results. Financial analysts are invited to participate in the call by dialing at least 10 minutes before start time 1 (866) 321-8231 (toll free - North America) or 1 (416) 642-5213 (International), while media and other interested individuals are invited to listen to the live webcast on the Domtar Corporation website at www.domtar.com.

The Company will hold its 2013 Annual Meeting of Stockholders on Wednesday, May 1st, 2013 at 9:00 a.m. (ET) at the Montreal Museum of Fine Arts, Claire and Marc Bourgie Pavilion, 1339 Sherbrooke Street West, Montreal, Quebec. The Company will release its second quarter 2013 earnings on July 25, 2013 before markets open, followed by a conference call at 10:00 a.m. (ET) to discuss results. The date is tentative and will be confirmed approximately three weeks prior to the official earnings release date.

For the full release with tables please follow this link.....