A.Celli X-Roll: how to reduce the consumption of a Tissue machine with a single press nip configuration

Among the main features of quality Tissue paper there are certainly a high bulkiness and softness. How can this be achieved by using a conventional configuration with a single press nip and, at the same time, decrease energy consumption? The answer is our A.Celli X-Roll solution.

The demands of the Tissue industry

Tissue paper producers all over the world are constantly looking for solutions that allow them to offer high quality products without possibly increasing production costs, among which those linked to energy consumption certainly stand out. In fact, as highlighted in the previous article about water management in a Tissue plant, we recall that the final evaporation eliminates a relatively small part of the total water present in the fibers, but involves a considerable waste of thermal energy supplied by steam boilers (for the operation of the Yankee Dryer) and by an aerothermal system.

With this in mind, a series of studies conducted on pilot lines led to the conclusion that the key to obtaining the best results in terms of bulk without negatively affecting consumption could be represented not so much by the pressing phase that takes place in the nip between the suction press roll and the Yankee Dryer, but from the previous pre-drying phase carried out by means of the suction sector of the press roll itself located immediately before the nip.

The results of the studies described above show, in fact, that a significant impact on the output of the production process is due to the degree of dryness of the felt and, therefore, by the ability of the latter to absorb water from the Tissue paper. Starting from this, A.Celli has developed a solution to optimize the configuration with a single press nip in order to obtain Tissue paper of equal quality and, at the same time, a reduction in energy consumption associated with the drying area.

Let's analyze the operation of a conventional Tissue machine with a single press: 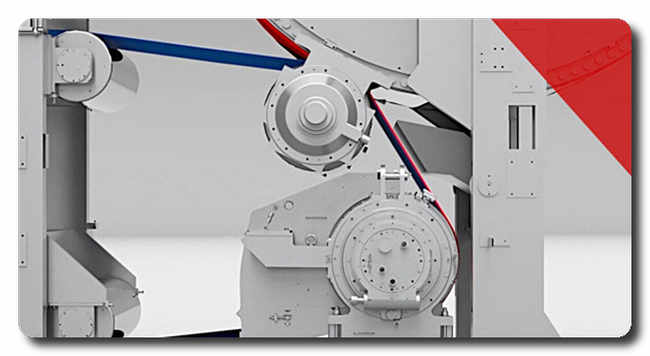 In this case, the pressing that takes place in the nip formed by the suction press roll and the Yankee Dryer will be contextual to the action of the vacuum sector inside the suction press roll itself. The latter consists of a perforated cylinder equipped with a metal shell and covered in synthetic material, and the holes have the task of retaining the water drained by the pressing action. Inside the shell there is a suction box whose task is to create a depression inside the press itself by connecting to a vacuum pump, thus sucking the air present in the holes in order to allow the water to be housed inside them. This water will then be extracted by centrifugation as soon as the effect of the vacuum itself disappears..

However, the positioning of the steam box is not optimized from the point of view of efficiency as it acts in a point where the Tissue paper still has a high amount of water. In addition to this, the case thus positioned is subject to clogging due to the fiber fragments expelled by centrifugal force from the felt during the passage on the suction press roll. The consequence is that these fragments, once the steam box is activated, will be thrown at high speed against the Tissue paper, causing breakages.

As we have said, A.Celli X-Roll's goal is to combine the quality of Tissue paper obtainable using the traditional configuration with a lower total energy consumption.

To achieve this result, the goal was to ensure a high degree of dryness of the felt before the pressing phase, so as to reduce the power to be supplied in the drying section during the subsequent evaporation phase. While the conventional configuration first envisages the combined action of the steam box and the vacuum followed by the action exerted by the nip, A.Celli X-Roll uses in succession a suction roll, a steam box and a blind press:

In terms of energy savings, we were able to detect, from tests performed on a pilot line, that the A.Celli X-Roll solution leads to a 4% increase in the degree of dryness of the paper exiting the pressing process compared to the conventional configuration,which translates into an energy saving of over 16% in the drying phase.

More in this category: « Successful start-up of Papel Aralar’s PM 5 for sustainable wet wipes Metsä Board starts a development programme for its Kemi paperboard mill »
back to top