Figures in brackets, unless otherwise stated, refer to the comparison period, i.e. the same period of the previous year. Automation has been consolidated into Valmet's financials since April 1, 2015, when the acquisition of Automation was completed.

Valmet reiterates its guidance for 2015

Global growth is projected at 3.3 percent in 2015, marginally lower than in 2014, with a gradual pickup in advanced economies and a slowdown in emerging market and developing economies. In 2016, growth is expected to strengthen to 3.8 percent. The distribution of risks to global economic activity is still tilted to the downside. Near-term risks include increased financial market volatility and disruptive asset price shifts, while lower potential output. (International Monetary Fund, July 9, 2015)

President and CEO Pasi Laine: Together with Automation, Valmet becomes a stronger company

When the acquisition of Process Automation Systems was completed on April 1, 2015, Valmet got its fourth business line, called Automation. Our customers appreciate that we have reunited the automation expertise with paper, pulp, and power plant technology and process know-how, within the same company. This change has energized and motivated our employees too.

Automation had a strong start as a part of Valmet, and over time I believe that we can achieve even greater benefits through good internal cooperation. With an integrated sales process, harmonized project execution, wider offering and enhanced product development, we will be able to serve our customers even better than before. All in all, Valmet will become a stronger company.

Valmet's performance in the second quarter of 2015 was solid: net sales increased, profitability improved and the EBITA margin reached our targeted range. Good development continued in the Services business line. Additionally we are continuing our focus on cost control and successful project execution. 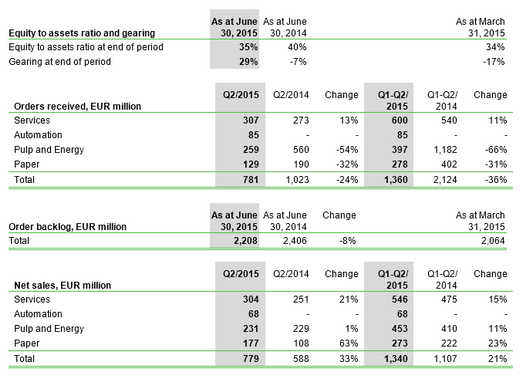 Valmet is the leading global developer and supplier of technologies, automation and services for the pulp, paper and energy industries. Valmet's vision is to become the global champion in serving its customers.

Valmet's net sales in 2014 were approximately EUR 2.5 billion. Our 12,000 professionals around the world work close to our customers and are committed to moving our customers' performance forward - every day. Valmet's head office is in Espoo, Finland and its shares are listed on the NASDAQ OMX Helsinki Ltd.

More in this category: « Clearwater Paper Reports Second Quarter 2015 Results ANDRITZ GROUP: results for the first half of 2015 »
back to top