The President of the United States visited Vacon in North Carolina

President Barack Obama paid a visit to the Vacon Research and Development center in Research Triangle Park, NC today the 15th January 2014. The visit was part of the president's travel to North Carolina. The president's tour at Vacon was also accompanied by Ernest Moniz, United States Secretary of Energy.

"We were privileged and honored to welcome President Obama to Vacon. We arranged a tour at our R&D lab, demonstrating how Vacon is actively involved with making the world and our way of living more sustainable in terms of energy efficiency," said Dan Isaksson, vice president of medium voltage drives at Vacon, who was one of the hosts during the visit.

"So the reason I came here today is because we've got to do more to connect universities like NC State with companies like Vacon to make America the number-one place in the world to open new businesses and create new jobs. We want to do that here in North Carolina, and we want to do this all across America," said President Obama during his speech at the North Carolina State University.

Vacon, headquartered in Finland, is the world's largest company focusing solely on AC drives, which are used to control the speed of electric motors to maximize energy efficiency. Vacon's operations in North Carolina are focused on research and development of Vacon's new product line, medium-voltage AC drives. 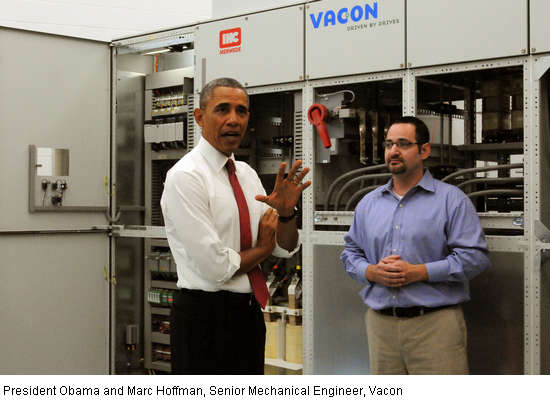 In November 2013 Vacon published its new vision, The Drives Family where the best people work together to develop the best products, applications and services for customers. "The newly-published Vacon vision is tangible here in North Carolina. The combination of a highly skilled and innovative workforce, a business-friendly climate and the opportunity to collaborate with various companies and universities made the Triangle area a great choice for Vacon," Isaksson said.