Biomass plant on track to begin running in late 2013

More than 400 people have helped build the $250 million biomass power plant that now towers over Business Highway 51 and the Wisconsin River, and their months of hard work have the project on schedule to begin generating power late this year. 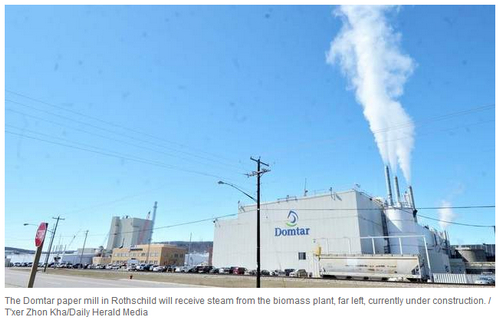 When the facility opens, a parade of 50 to 75 semitrucks every weekday will keep the plant’s boilers stoked with treetops and branches that will create steam and electricity. In addition to producing clean energy, the new site will improve air quality by reducing overall emissions from the Domtar paper mill by about 30 percent, according to a Domtar and We Energies informational handout.

That parade of trucks loaded down with 300,000 to 500,000 tons of wood debris referred to as biomass will come from forests within a 75-mile radius and will employ dozens more people, including Jeff Plunkett, fiber procurement manager for Domtar.

Plunkett is in charge of buying wood materials for the paper mill and new biomass facility. He said he has a growing list of local contractors lined up to provide the wood waste, though he declined to name any.

“This gives an opportunity for the forest products industry for an additional outlet for their material,” Plunkett said. “It will open up potential new markets for people who want to get into the wood waste business  and market it instead of burning or putting it in a landfill.”

In November 2008, the company began talks with We Energies to develop an alternative energy source, and the partnership was announced in September 2009 for a new biomass plant to be built at the Domtar Rothschild site. Since its introduction, the project has divided village residents and faced opposition because of its hefty price tag. Construction began in August 2011.

Rick Graap, owner of Graap Logging in Merrill, has supported the biomass facility since it was first proposed. He hopes to have a contract later this year as one of the biomass material providers for the new facility, and already has about 25,000 tons of tree tops and branches stored in north central Wisconsin.

Graap said he plans to hire about two to three new employees to drive trucks, should he contract with Domtar and We Engergies. He will also hire two other employees to operate in the woods.

“I’m excited not only for myself but also for the raw forest products industry in the state,” he said. “When you diversify markets, it strengthens the industry in any business. Not to mention all of the other related tire and parts companies that will benefit from this amazing addition to central Wisconsin.”

Once the facility is in full operation, the plant will employ about 30 full-time workers. About 60 percent of the steam will drive a turbine to create electricity for We Energies, a Milwaukee-based energy company. The remaining steam will be used inside Domtar’s Rothschild mill, which employs 400 people.

While Domtar will continue to buy electricity from Wisconsin Public Service Corp., the new 50-megawatt biomass facility will supply 100 percent of the mill’s steam, used to create the high-pressure, high-temperature environment necessary to convert wood chips to pulp and to dry paper after it is made, said Craig Timm, a Domtar spokesman.

Before the plant opens late this year, many parts need to be prepped and tested, including the biomass boiler, the fuel-handling system and steam blows. Testing the biomass boiler ensures boiler pipes are welded properly and can withstand required pressure. The steam blows push steam through pipes to clear dirt and debris that accumulate during construction, and the fuel-handling system includes conveyor systems and the truck unloader.

More in this category: « Metsä Group’s tissue and cooking paper business invests in bioenergy in Sweden Jiangsu Huadian Jurong Power chooses Metso’s automation for its two 1000 MW units in China »
back to top