Sustainability and availability won the race for Incada

After the Brexit referendum, Windles, one of the UK’s leading printers specialising in greeting cards and high end packaging, had cause to review its supply of paper and paperboard. After careful consideration, the company decided on the domestically produced paperboard Incada from Iggesund Paperboard, who have driven a powerful marketing campaign to create awareness of the product.

“But the choice was not only nationalistic. We tried to look at all aspects – price neutrality, availability, quality and everything that is included in the concept of total cost of ownership,” explains Windles’ Managing Director Bruce Podmore.

Windles, one of the UK’s leading printers specialising in greeting cards and high end packaging, chose Incada for both availability and excellent print result.

Windles moved into new premises in Thame, Oxfordshire, a couple of years ago. The factory was designed with long-term sustainability in mind. It is heated 80% with biomass, as the company extracts all the required energy from all the pallet wood it previously had to pay to get rid of. Nearby is another building designed to help the local bat population reproduce, a facility which Bruce Podmore calls “the bat cave”. Also on site is “the badger hotel”, a badger sett that was purpose built to house the local badgers.

“The most important aspects of our decision to choose Incada as our house paperboard were our desire to reduce our carbon footprint, plus Incada’s availability. With alternative manufacturers offering lead times of about 15 weeks, we would have needed a buffer of stocks to compensate for disruptions in the supply chains. That costs money, and more than we had expected,” Podmore continues.

“The lead times we can get for Incada with its production facility in Cumbria are significantly shorter than many of our previous supply arrangements,” he adds. “It’s also important not to underestimate the value of learning complete mastery of a material if it’s something you use often.”

Windles buys its paperboard via the merchant Antalis, and the collaboration with Iggesund was cemented when the two companies jointly visited the mill at Workington for a review of Incada’s performance and environmental properties. 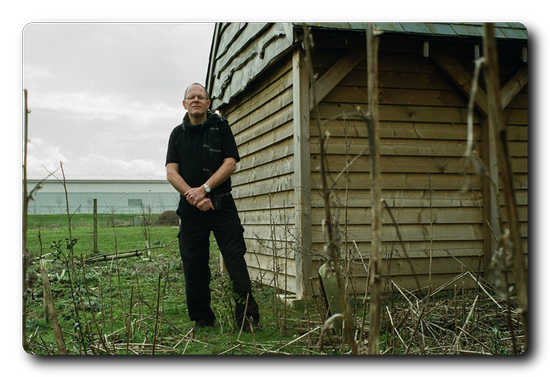 Bruce Podmore at “the bat cave”, a building designed to help the local bat population reproduce, a requirement for Windles present location.

“For us it’s ideal to have a high-quality paperboard that is made nearby,” Podmore says. “Minimal shipments, short lead times and very good print results are quite simply a winning combination. And from a British perspective it’s also positive that we are buying input goods whose manufacture creates jobs in the UK.”

With regard to print properties, he says that Incada is one of the whitest paperboards on the market with an impressive surface smoothness, which also provides stability for creative cold foil, the process Windles is renowned for.

“Printing will be a dream where you don’t have to think about the yellowness of a board when designing. Glossy and matt finishes, and true baby blues and pinks are achievable without compensation – and there’s a huge improvement in lead times and fantastic service from the mill, plus we can guarantee the quality,” he says. “In addition, at Windles we are always striving to act in the most environmentally responsible way we can, which is why the fit of Incada being produced in the UK and at a mill using biomass for its energy is so important to us. Quite simply, we believe it is the right thing to do.”

More in this category: « Valmet to supply a warp control system to Stora Enso Packaging's corrugated board plant in Ostroleka, Poland Speed record for a Recard machine: 2150 m/min »
back to top