What can we give as a Christmas present when we don’t know what the other person wants? A gift card is one option that always works. But gift cards have changed over the past decade or so. What used to be a written commitment has become packaged offerings of money, experiences, music or other items, often in the form of a credit-card-sized PVC card. 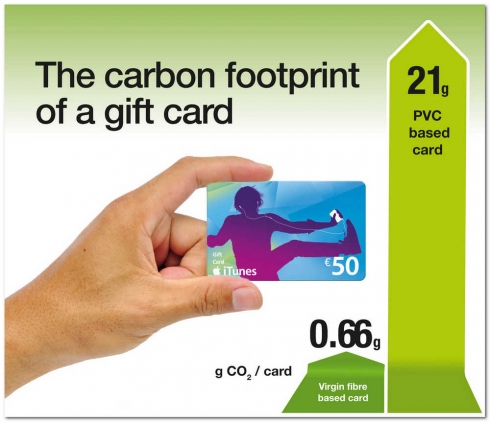 How do these plastic cards in our wallets affect the environment? Estimates in the United States conclude that five new cards are produced there per inhabitant per year. The equivalent for Europe would mean the production of 2.5 billion cards annually, resulting in the emission of 52,500 tonnes of fossil carbon dioxide.

“If we replaced those plastic cards with ones made of virgin fibre paperboard, the emissions would only be one-thirtieth of what comes from making the plastic cards in the best scenario,” explains Jonas Adler, Business Development Director for Iggesund Paperboard.

In the United States a debate about the carbon emissions from all these plastic gift, discount and membership cards has been going on for some years now and has led to a growing demand for gift cards made of paperboard. This trend is now making its way to Europe.

“A number of American manufacturers have chosen paperboard as the base material for their cards for environmental reasons,” Adler says. “European manufacturers are now also considering the environmental effects of their choice of material. Normally Europe is ahead of the US when it comes to reducing this type of emission but in this case we are lagging behind.”

Driving the new trend is the difference in carbon footprint between the two materials. A paperboard card weighs just over half as much as a plastic card. The paperboard card leads to the release of only one-thirtieth of the amount of fossil carbon produced from making the plastic cards, based on the published values for Iggesund’s Invercote Duo paperboard and the plastics used for the cards.

Even though the difference in emissions between the two card materials is huge, this is not the most urgent environmental issue but it can be an important symbolic step for a company to take.

“For a company that issues hundreds of thousands of plastic cards, the difference in environmental impact is great enough that it cannot be ignored,” comments Ola Buhrman, Technical Product Manager of the card product line. “Our experiences from the US and the fact that we have a standard product which functions like clockwork in the processes make us very competitive. And it’s technically easy for card producers to switch materials.”

He emphasises that Invercote Duo meets ISO/IEC 7810 and 7811, which specifies the dimensional stability and flatness required for the gift cards to function in a card reader. Invercote can handle complex printing processes and finishing steps like embossing, and it is not difficult to integrate a magnetic strip or a chip. For extra durability a bio-degradable coating layer can be applied.

Invercote is made at Iggesund Mill in Sweden. Bioenergy supplies more than 98 per cent of the mill’s energy needs and Invercote has one of the smallest carbon footprints on the paperboard market. In 2012 Iggesund Paperboard had its highest production level ever while simultaneously having the lowest emissions of environmentally harmful substances since it began manufacturing paper products almost a century ago.

“Yet another advantage of Invercote is that it can be supplied made from certified raw material and it is certified compostable in accordance with the EN 13432 standard,” Jonas Adler concludes. “All in all, it’s a perfect base material for all gift card manufacturers who want to minimise their environmental impact.”

More in this category: « TENCEL® Plant in Lenzing: Positive Scorecard in the Six-Month Ramp-up Phase Three Forces of PMP Group – The final stage »
back to top