ANDRITZ Nonwoven, part of international technology Group ANDRITZ, has received two orders from Fujian NanFang Textile Co., Ltd (PRC) to supply two new neXline spunlace nonwoven lines for its new plant in the city of NanPing, Fujian Province, China. Start-up of both lines, which will produce facial papers and wipes, is scheduled for the first quarter of 2017.

Spunlace line #1 supplied by ANDRITZ will be capable of processing 100% bleached cotton fibers in a crosslapping configuration with an eXcelle card, a Dynamic crosslapper, a drafter and another eXcelle card, including the ProDyn and Isolayer functions, in order to enhance the web profile uniformity and thus save raw materials. For web bonding, ANDRITZ will supply its Jetlace Avantage hydroentanglement unit. 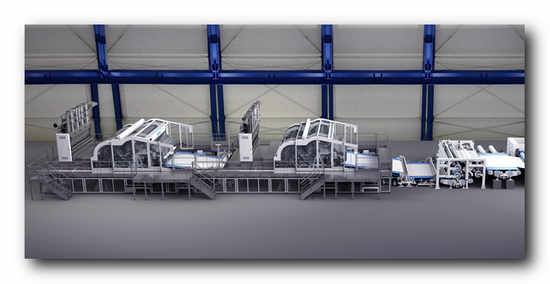 Line #2 is a high-speed spunlace line for processing viscose and polyester fibers. It will have two ANDRITZ TT cards for web forming and a Jetlace Essentiel unit for hydroentanglement. The TT card technology enables drylaid web forming at very high speed. ANDRITZ has a large number of very successful installations with TT card technology around the globe, with more than thirty machines in operation and an average capacity of 20,000 t/a per line. The TT cards for NanFang will be the first to be installed in China.

NanFang has already invested in three spunlace lines in the past, the first of which was installed in 2002.

ANDRITZ is a globally leading supplier of plants, equipment, and services for hydropower stations, the pulp and paper industry, the metalworking and steel industries, and for solid/liquid separation in the municipal and industrial sectors. The publicly listed technology Group is headquartered in Graz, Austria, and has a staff of approximately 25,500 employees. ANDRITZ operates over 250 sites worldwide.