In February 2016, Södra’s Board of Directors decided to invest SEK 1 billion in a new evaporator and modernisation of the brown stock washing system in the dissolving pulp line, where textile pulp is produced.  Södra is now awarding ANDRITZ Oy, a subsidiary of the international technology Group ANDRITZ, the contract to supply the evaporator. 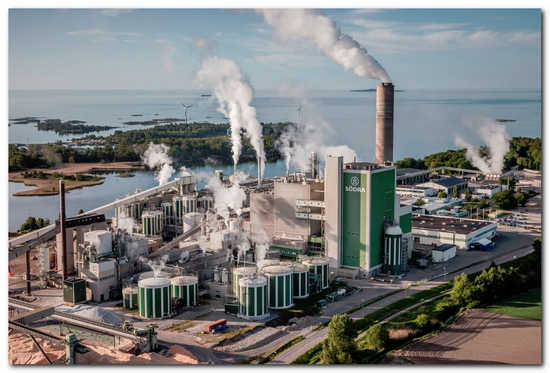 Södra is growing together with its customers. During the 2014-2020 strategy period, Södra Cell Mörrum will gradually begin to offer larger volumes and increase production capacity from 380,000 tonnes to 500,000 tonnes, of which 200,000 tonnes will consist of high-quality dissolving pulp.

On 18 March, Södra awarded ANDRITZ Oy, a subsidiary of the international technology Group ANDRITZ, the contract to supply a new evaporation plant for the pulp mill in Mörrum. The start-up is planned for the fourth quarter of 2017.

“We are looking forward to increasing the volume of Södra Cell Mörrum’s leading-edge products. Together with Andritz, we will build a highly technological evaporator that not only reinforces the energy efficiency of our pulp mill, but also strengthens and improves the process as a whole,” said Stefan Sandberg, Mill Manager, Södra Cell Mörrum

A new evaporator will make it possible for Södra to increase its production rate while also enabling larger deliveries of energy products, such as electricity, district heating and biofuels. The new investment will increase production capacity by 45,000 tonnes, bringing the total production of paper and dissolving pulp to 470,000 tonnes.

The new 7-effect evaporator represents an important step in Södra Cell Mörrum’s strategy plan to expand its production capacity. The evaporation plant will produce lye with a high content of dry solids, and replace the existing evaporation lines while considerably improving the energy efficiency of the mill. This will lead to a significant energy surplus at the mill, in turn enabling increased energy supplies.

More in this category: « Metsä Board's new folding boxboard machine at Husum mill inaugurated Magma and MagmaHigh: New Dryer Fabrics from Voith for the High-temperature Range »
back to top